I'm sure our baracuda has free will

In our pool lives a baracuda. It's job is a simple one, to suck up all the nasty bugs that find their way into the pool at night and expire at the bottom of it, and generally spend around eight hours a day cleaning the bottom and sides of the pool. It's basically an autonomous robot-like thing that moves around the pool using hydrodynamics (apparently), and looks like a cross between a beetle head and a sea urchin (see image below). As it moves around it makes a quick schlurp-schlurp noise (thrumm thrumm if you're underwater and find yourself in it's path), which is basically the sound of it alternately sucking up stuff and propelling itself along with the water it pushes out. Now this thing ain't pretty, and it ain't small either, the diaphragm is about 60cm in diameter, and it's about 50cm tall. 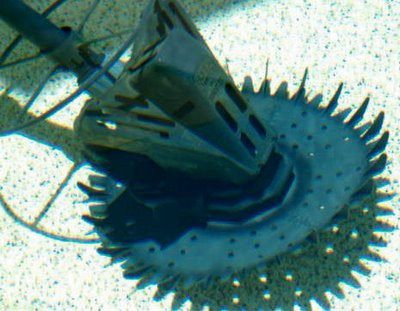 I swear this thing follows me.

I can be at the opposite end of the pool to it; the next thing I know it's simultaneously slurping away at the top of my foot and scaring the living crap out of me. Dave would like to have a word with the designers of this particular baracuda model. For a start, why make it look so scary? What's even more freaky is when it's turned off, and you're minding your own buisness swimming around under the water, then suddenly the surface of the pool starts to undulate and there's a deep throbbing followed by a slurping noise, and it springs to life attaching itself to your head. I think there's something sinister about the way it sucks up all the spiders and roaches and flies then comes after you.

But enough about the killer robot.

Today I thought that I was invincible to UV rays. Unfortunately, the odds were against me. Firstly, the UV index was at extreme today, secondly, I'm a little white English boy, and thirdly, I'm not actually invincible to UV. It wasn't like I was outside for particularly long periods of time either, just a couple of dips in the pool and some time taking photos round-and-about, but now my back and shoulders are a temperature approximating that of magma, and are a lovely shade of beetroot. I'm currently thanking the evolutionary coicidence that created aloe vera (apologies to all you creationists out there).

So life is continuing pretty much unchanged here on the Sunshine Coast. Christmas is now 'only two sleeps away' as all the Coles and Myer adverts keep telling me, and the weather is getting hotter and hotter. NineMSN reckon that it'll be at least 37 on Christmas day, so I'm gonna have to befriend some people with air conditioning pretty quickly...

Music of the moment: The Boat People: Clean