Two days ago (Wednesday) we took a trip out into the hinterland. In my opinion it should be called das hinterland, but since very few Germans live there there's not much of a case for the name change.

We set off early, pointing the car west and enjoying the air conditioned comfort it offered, whilst all around us the world slowly got hotter and starker. After crossing the escarpment, the landscape started to drain of colour. It was as if the grass and few trees needed colour as well as water to live, and were gradually bleeding the colour from the landscape. In the few places where trees had managed to grow, the scenery was breathtaking. 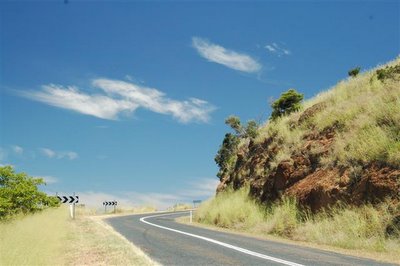 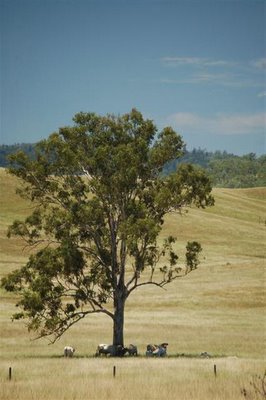 We ambled on and on through the hinterland, until we came to a place called Linville, where the road aprubtly turned into a dirt track. This was true ocka-land. These guys don't even get mains water, instead they pay extortionate amounts of money to have tankers come and fill up their enormous water tanks every week. Linville itself could never really be described as a village, or even a township. There is one street, and seven houses. Despite this there is a pub and general store, however these serve people in the surrounding area too. The most striking feature of the place is the abandoned railway station, which has a small 70's QR train sat on a rail that struggles against and eventually gives up to the bushland only metres from the carridges. As a sign proudly proclaims, the Linville train station is a community restoration project. The sign neglects to mention from when this restoration began, or when it is expected to complete, but this is understandable since the 'community' likely consists of no more than twenty people. 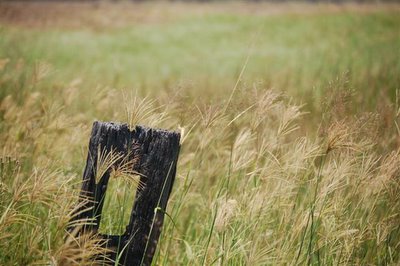 The locals in the villages in this area seem to have found a unique method of recycling old tractors/cars/ploughs, by leaving them in their front gardens and allowing them to rust and become overgrown, thus becoming interesting lawn ornaments. And most cases it works remarkably well, save for a few more eccentric homeowners who turn their gardens into massive graveyards of half consumed farm machinery. It's almost like putting a stone in your house with the year it was built; the older your rotting ute is, the longer your family has been here. Much like the British do with old sofas I guess... 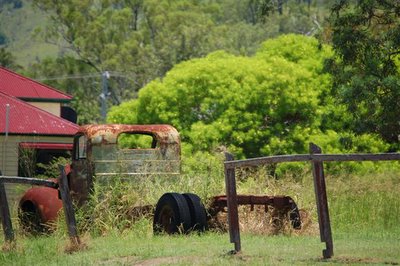 In a nutshell: a disappointment. By the 29th of December, anything in the sales that was my size had been bought already. A perfect example of sod's law. I did head over to Rocking Horse Records though and make a few purchases:

Reckon I'll be needing a bigger suitcase for the journey back...

Which brings us rather neatly to today. Mum and I set of at about 10am to Australia Zoo. I've been there before, but the place has expanded to almost twice the size it was. There is an enormous new 'Crocoseum' that seats 5000, and is more like a sports venue than a zoo. We saw tigers and birds, then (after a ridiculous warm up), Steve Irwin and his (odd) wife Terri showed up for the main croc show. It was really entertaining until the croc went off to chew some food, and wouldn't swallow it. Steve had to disappear for a couple of minutes to coax it back into the holding pen, leaving Terri centrestage to entertain us. So she started telling us about how she and Steve first met and how brave he is and blah blah (vomit), much to the bewilderment of her audience who'd just come to watch Steve throw himself around with some crocodiles, not listen to some strange American woman belt on about Steve praying for a girlfriend before she came along. 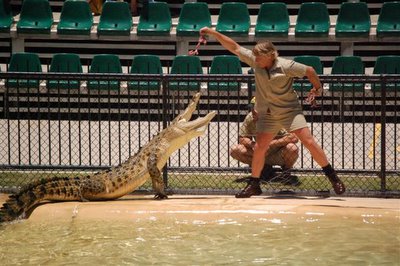 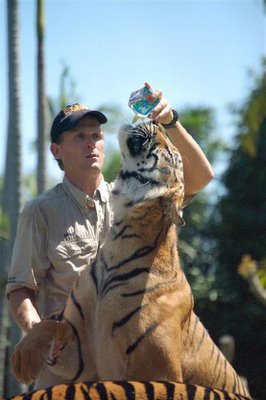