So, not to disappoint, I managed to mess up my foot somehow when I was in Sydney and now I’ve been advised to stay off it for the next three days, meaning I’m going to have to convince some other poor unsuspecting soul to take care of my Christmas shopping for me. (This is the part where I lean back and cackle menacingly). So it looks like Phil and Phil will be heading off to Sunshine Plaza on my behalf, armed with sufficiently vague advice as ‘get so-and-so something they’ll like’. Specifics are so last year.

And Phil I has Tonsillitis.

On the wedding...
Mamie got married to Les last week, and since Phil (brother) and I were giving her away we all flew down south for a long weekend. The ceremony was held in the garden and luckily it was a cloudy day so the temperature was comfortable enough to wear long sleeved shirts. The guy who performed the ceremony must’ve been, oh, about 600, and wore the thickest pair of glasses I’ve ever seen. It’s a good job the sun wasn’t out – he’d have had his eyes burnt away. It would have been like using a magnifying glass on ants.
The ceremony itself was beautiful and went without a hitch. I must admit I got a little teary eyed at a couple of points, but managed to cover that up with the camera! 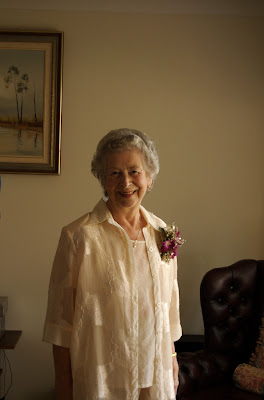 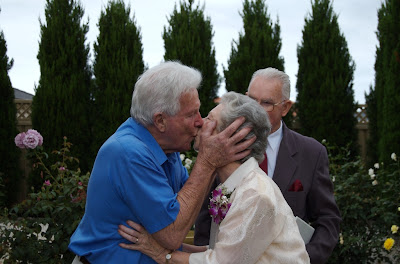 Mamie and Les
On the new relatives...
The crazy thing that happens when your grandmother gets married is that your family tree suddenly explodes. As soon as their signatures hit the paper you’re instantly related to everyone at the ceremony. Before that, you’re only related to about 10%. So it’s even more embarrassing when one of them has too much to drink. Sure, they can make a fool of themselves *before* they’re related to you, but not after. Here’s a running tally of new relatives I know of:

There are probably more that I don’t even know exist. I know I haven’t met one or two of my new step cousins yet...

Here are some of my step cousins: Alana and her brother Alec, and Bronwyn and her sister Karyn. 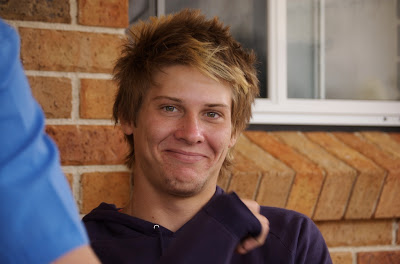 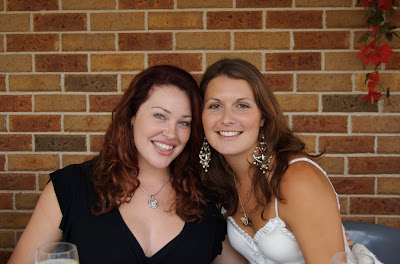 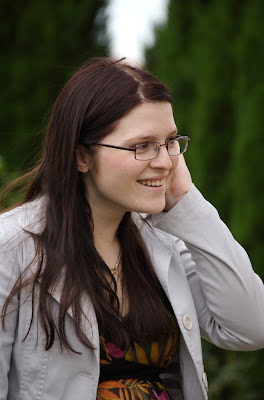 Karyn
Turns out that Bronwyn will be moving to London in mid January, so we’ve swapped numbers in case we fancy grabbing a coffee sometime.

On charades...
After the food (of which there was masses), some fool suggested we play charades. To be fair, that’s a hell of a lot more entertaining than listening to Les explain how to do something, which is what usually happens whenever there’s a gap in conversation. But charades is still rubbish. Unless you’ve got a camera, at which point it becomes a whole lot more interesting. When else can you get candid shots of people pulling silly poses/faces? I must admit I did a little evil purr. I’m even looking forward to the inevitable charades at Christmas. I’m so gonna burn for this. 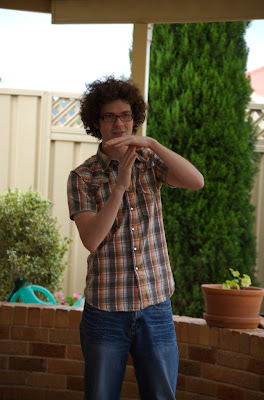 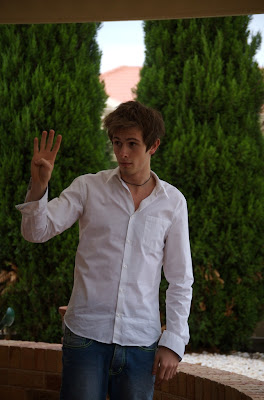 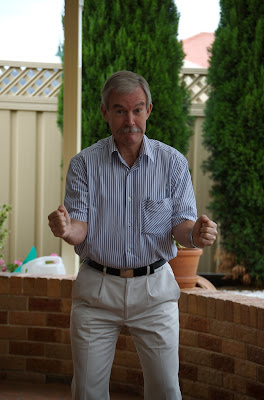 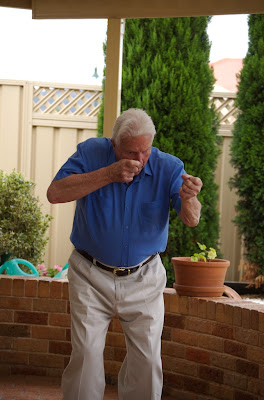 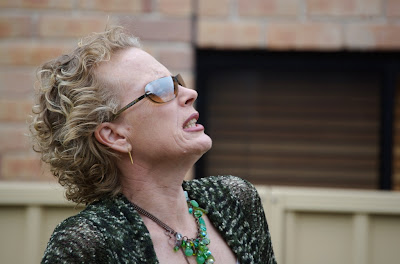 Theona (new step aunt)
On Christmas lights...
And we thought it was bad in Blackbird Lees. The Australians appear to take Christmas lights very seriously indeed. In fact, just yesterday my mum had to help one of our neighbours down from his roof after he became stranded putting his lights up. You should be able to see it from space now. Below are a few camera-shake stricken snaps from the streets surrounding Mamie’s house (and yes, that *is* Santa coming out of the blowhole of a whale): 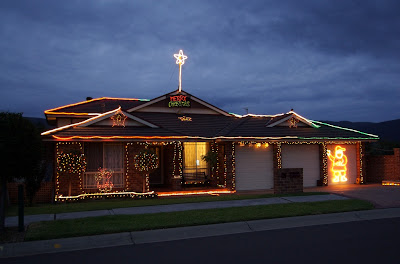 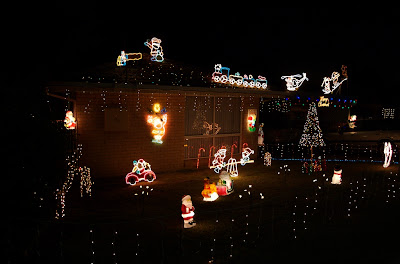 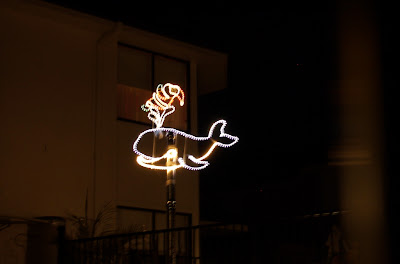 On the Sunday Mum and Malcolm headed back to the Sunshine Coast, and back to the hot weather. It was raining when we arrived in Sydney and was unseasonably chilly but things were slowly starting to pick up. The two Phils and I had booked a couple of days in a hotel in Sydney to give us chance to have a good look around. We went to the Australian Museum on the Tuesday and had a good look around. TWO ENTIRE FLOORS were devoted to geology. Which is probably pretty interesting if, like my brother, you’re studying it at uni. But for the other Phil and I it wasn’t the most entertaining part of the whole experience. The bones exhibition was pretty cool though. Especially the ‘Bone Ranger’: 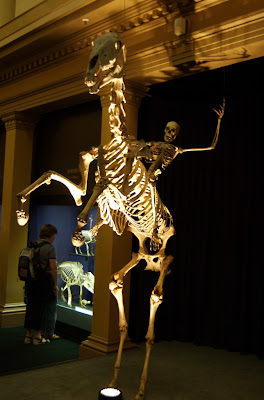 What’s going on there? Where’s Barry Scott? I’ll be having words.

Oh, and I’ve just found out that my mate George staged a walk out at her work the other day after an arsey email from a director. How cool is that?! It might be giving me ideas...

Thanks for all your emails chaps, they’ve been making me chuckle every now and then. Nice to know that you’re all starting to unwind for Christmas. Must admit I got a pang of homesickness yesterday after watching some holiday special where it was all cold and snowy and Christmassy. This just doesn’t feel like Christmas. It was only yesterday I realised we didn’t even have a tree up. Things like that just don’t cross your mind when it’s in the thirties and takes a lot of effort to keep cool. So keep the emails and texts coming, especially as I’m gonna be housebound for the next three days!

And if I don’t say it before the day itself, have a happy Christmas everyone!
Posted by Dave at 2:35 PM